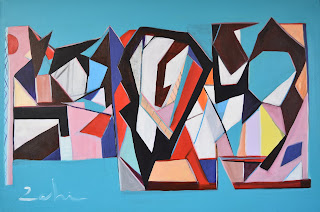 Now in Exile  by Zahi Khamis

Watching the first two episodes of Genius: Picasso on the National Geographic channel (first episode a somewhat overheated exposition of the creation of Guernica), I was reminded of a quotation I have on my office door, attributed to Picasso, “Art is not made to decorate rooms. It is an offensive weapon in the defense against the enemy.”
The artist Zahi Khamis, whose work I am showing in my gallery in May, holds the same philosophy. His jagged style and startling colors remind me of a similar moment in Picasso’s practice, along with painting as a statement against injustice.
He, and many artists, are on the offense in their work. Which makes me think about the secondary meaning of the word “offensive.”
According to some dictionaries the first listed meaning is “causing someone to feel deeply hurt, upset, or angry,” “giving painful or unpleasant sensations,” and “causing displeasure or resentment.”
The second is “actively aggressive; attacking.” Interestingly, in some of the older dictionaries, the order of these definitions is reversed.
Can art be offensive without being “offensive?” Do we want it to be? Is the message stronger when the work gives “unpleasant sensations?” Does “causing displeasure or resentment” increase or dilute the power of the artwork?
I have often said “you must look before you can see” in defense of work with powerful messages that are deemed too “pretty.” I’m not sure how I feel about that now. I dislike shock for its own sake, but sometimes viewers need to be shaken out of their complacency; thus, weaponized art.
But I’m still going with the idea that beauty can be “offensive.”

My previous blog reminded me of a piece I published several years ago, adapted here. In the sometimes rarified world of art and ...

CuratorDagmar
"Maupassant thought that painting was more advanced than literature because in painting there are so many nuances." "In language you don't have 50 words for pink." I hope to give you 50 words.